In the 21st century where the world economy is immensely integrated and diverse, we see that there is dependency between nations and this integration among countries have their advantages as well as disadvantages. Talking about trade and diversification of technology, such a kind of  integration can help boost GDP and  help in the growth of the respective nations, but, when we say integration of economies we also have to look at the political framework within the economies and how they operate. Due to such integration there is an amalgamation of events which leads to a situation of crisis. In such a scenario, all the countries associated with that event might face economic and political turmoil thereby seeking external help from institutions like the IMF and the World Bank.

One such crisis is the European Debt crisis which started in the year 2010. Various European countries experienced the collapse of financial institutions, increasing bond yield spread in government securities and high government debt. As it was the case of Sovereign debt (the amount of money that a country’s government has borrowed, typically issued as bonds denominated in a reserve currency) that was not paid, it was not just a one country problem but a problem for all the European countries with whom the sovereign bond were traded. The default on paying these debts lead to the bond interest rates rise and thereby created a state of turmoil between the countries. The five major countries that were in immediate danger were Greece, Ireland, Italy, Portugal, and Spain.

Intervention of IMF in the European debt Crisis

Ever since the debt crisis began, IMF and the ECB had a major role to play in it. IMF being an external body that actively played a part in the European Debt Crisis posed many questions as to why was the crisis so active on the first place? Or whether the institutions in Europe were so weak that  they could not solve the situation unless until some external help was provided to them? Table-1 is a snapshot of IMFs rescue packages for Greece Ireland and Portugal. Over time more countries in the Euro-zone were added to the list for getting financial assistance from the IMF. 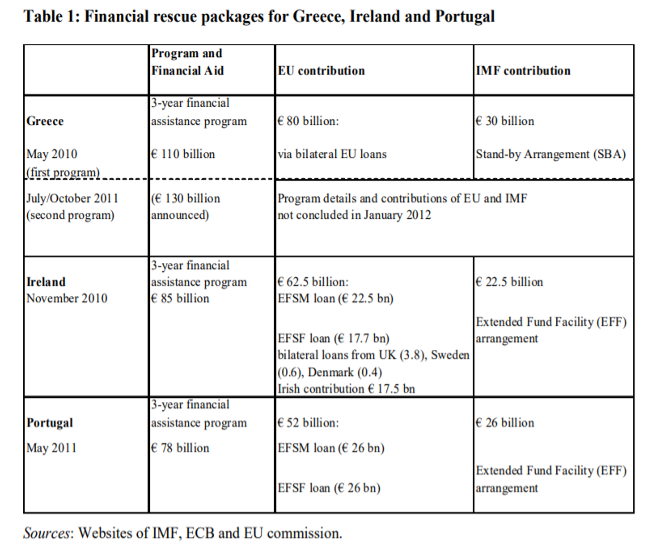 In the EDC, besides saving Greece from a default, the IMF prevented the spread of the crisis in other countries and the breaking up of the euro zone. Looking through this perspective the IMF has a very supportive role to play during times of crisis but the major implication related to IMF’s intervention is that it focuses on the short term solutions and tries to revive the economy through fiscal rules. The criterion of disbursements of liquidity by the IMF is based on the fiscal policy changes that are implemented by the country that requires the help. In the case of the EDC it was related to reduction of debt. The problem posed here impacted countries like Greece as they had to increases taxes and reduce public spending.  As Greece was a weak economy this kind of contractionary fiscal policy manifested an increase in unemployment and a decrease in pensions, wages, and investments.

The high unemployment during the intervention of the IMF was one of the major reasons why Greece had a problem with the IMF intervention. Greece could not keep up with the short-term fiscal targets, high debt levels and rising public dissatisfaction with austerity. To overcome this problem the IMF drafted a way forward for Greece with several possible options. Firstly, it extended a third financial assistance package and require additional in Greece. Secondly, IMF suggested that Greece should leave the Eurozone through a unilateral decision by the Greek government or a temporary suspension and lastly, they could keep Greece in the Eurozone but the Greek government should be provided with greater flexibility in terms of debt relief and reforms.

After the Greek problem worsened IMF announced that it will take another rescue action as it was in direct interest of the IMF to do so. IMF, European Union (EU), and the European Central Bank (ECB) had come together to negotiate and monitor the economic programs for Greece, Ireland, and Portugal. This body was formed because the EU was unable to manage the problem, also the politicians of the donor countries did not have faith in the European Institutions. One point that came up during the EDC was that, although IMF proposed the funds, it was not sufficient enough to save a large country like Italy because for a matter of fact IMF could not fund the entire crisis on its own but still it participated in the rescue operation so that it could safeguard the role as the “global fire brigade”.

Geo-politics in the state of Crisis

The Intervention of the IMF and politics that was played among nations during the time of the European debt crisis had politically swayed IMF and had different dynamics in countries part of the EU.

To start with, the IMF intervention was an urge from the government of USA. They wanted the IMF to pump additional funds into the European economy because firstly, they feared the spread of the crisis in their country as EU is one of the major trading partners of the US. Secondly, from the political viewpoint the US wanted to stabilize Greece because Greece is a NATO member which is an important geopolitical region with an US military base.

Political dynamics posed public resentment in public. The economic policies implemented during the EDC were the main factors behind the elections which had been dominated by “New Democracy Party” and “Centre-Left Panhellenic Socialist Movement”

Among other known dynamics related to the crisis, continued economic stagnation across the EU and Eurozone, the rise of euro-sceptic political parties, and growing distrust and tensions among EU member states could also have the potential to hurt the efforts to widen and deepen the European integration.

To conclude, we can allude from the discussion that intervention of the IMF during the EDC had negative impacts on countries such as Greece but on the whole in helped the European Union to come out from the EDC and prevented major disintegration that could have taken place because of the crisis.

Does History Repeat Itself?